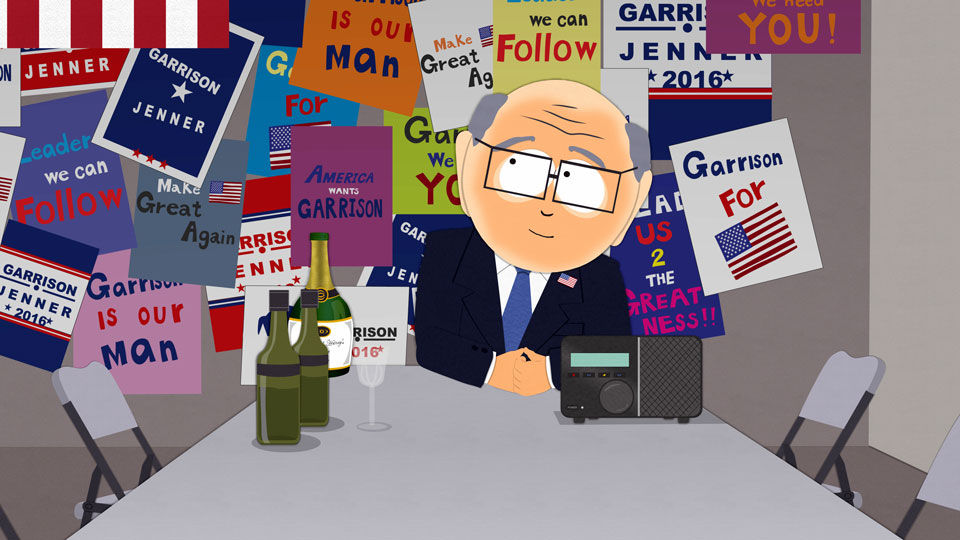 Trey Parker and Matt Stone’s absurd comedy with purposely poor animation is back! The episode starts off strong with a volleyball game modeled after the Olympics where the principle interest to the audience is whether or not people stand for the national anthem, and they quickly leave after discovering this. In order to make people like the national anthem again, the American government ask J.J. Abrams to  reboot it, and they take aim at his Star Wars reboot (reviewed here) when the new anthem is the same as the old anthem.

The season also picks up where the last one left off, with Mr. Garrison and Caitlyn Jenner running as a Donald Trump stand in, with an absolutely perfect narrative gag of Mr. Garrison doing too well in the polls despite actually trying to lose (this also resurrects the old school “giant douche vs. turd sandwich” joke). Mr. Garrison and Caitlin sit through the national anthem in hope of derailing the campaign and giving it to the turd sandwich (who is Hillary Clinton) This complements a trippy, out-of-nowhere plot element of “member berries”, which ask “member Reagan?” and “member when we were safe?” in a stupid high-pitched voice, as if it’s taking aim at Seth Rogen’s latest movie (which I review here).

Also, Cartman’s latest activity of being a social justice warrior in his own way – holding a school assembly to insist that “women are funny” and speak out against the harassment that women experience on the Internet. It’s heavily implied that he’s the aggressor (known as skankhunt42) as well as purposely botching his job, which wouldn’t surprise anyone who knows Cartman. But then he asks Kyle what if he isn’t skankhunt42 and he’s genuinely scared of having a gender war. When you learn that skankhunt42 is Kyle’s dad the absurdity just flows over you in a wave of hilarity.

Overall, the South Park season premier was excellent, chock full of absurdity, crudeness, and satire that made me laugh throughout and left me wanting more. There was a lot in there, as you can tell from how difficult it was to describe, but it’s good that Matt and Trey are staying ambitious. I think it’s going to be a great season!